Fourteen people- seven men and seven women- have been killed when a mine collapsed in the Rwagana Tin mine, east of Rwanda. The owners of the mine said the accident occurred because of heavy rains. The mine is concessioned to British group, Piran Resources.

A Reuters report posted on Piran Resources website, itself a confirmation of the incident,  quoted Fred Mufuruke, governor of Rwanda’s Eastern province as saying, “”Because of recent rainfall in the area, part of the hill nearby collapsed and 14 miners who were getting ready for work were buried by land,”

John Kanyangira, the director of mining inspection at Rwanda Mines, Petroleum and Gas Board (RBM), said: “It was an open mining site and a nearby hill collapsed, burying seven men and seven women”

Piran Resources has a 25-year mining licence in eastern Rwanda for two concessions.

In April last year, four miners were trapped for 72 hours at Mwurire and Musha sites in Rwagana. At the time, Piran Resources suspended mining activities and John Sanderson, the Piran Resources chief executive officer said the suspension of activity was intended to put in place better precautionary measures to avoid more accidents.

Last month, five miners were trapped underground at another mining site in the south of Rwanda. They were however dug out alive.

Government of Rwanda reports show the small east African country currently earns US$370 million from minerals, but the government intends to dive that up to US$600 million.

Rwanda is one of the largest producers of the 3T minerals- Tin, Tungsten and Tantalum. It also has deposits of Coltan, gold and Nickel, among others.  Rwanda produces 9 per cent of the world’s Tantalum. Tantalum is mainly used in electronics. 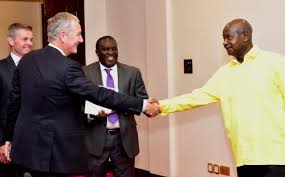